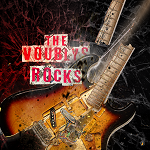 The Voublys ROCK with their latest album, ROCKS!

You know what they say about J-Rock… it’s intense, fast, and catchy! Well, while The Voublys are unique enough to escape the more generic trappings of the genre, just as any genre has them, they also excel in bringing out the best in what we expect from this kind of sound. You can see this fairly well in Rock N Roll Shaman (Dedicated to Jim Morrison), their single.

It’s also pretty clear to see it in their more recent single featuring Clare Estelle, “Love’s Denied”. We had fun gushing over that one, and we’re keen to see what new collaborations with these musical powerhouses might yield! Watch this space…

Well, it would turn out that Rock N Roll Shaman would just be a taster of what’s to come… and as for Love’s Denied, it was a collaborative effort – while this brings plenty of merits of its own, we were pretty keen to hear a new release from The Voublys – keen to hear the team playing on their home turf, as it were. Can you fault us for that craving? Probably not, when the result ROCKS this much!

This album is a fantastic example of how to do everything right. The drums, the tempo, the guitar, the vocal range… It was worth the wait to hear it finally blasting out of our speakers – and no matter what retailer you roll with, you’re spoiled for choice, because Rocks is on all of them! Even Songtradr! You can source this baby from anywhere online, so your speakers are GONNA feel the rumble, and you’re gonna feel the rush, so doncha worry!

And you read that right, Rock N Roll Shaman is included – like we said, that tribute was a preview to something even bigger. We think it was a sensible idea to also put it by itself in a single out of respect for Mr. Morrison, but you’d be mad to not also include it on this banger of an album!

The smashed guitar and broken glass font is the perfect representation of the kickass rock music that you’re going to unleash if you dare open this album up… but the chaos, we thrive in it! To say the least, it’s worth it. The Voublys have been silent for a decent amount of time before recent days, and now it’s clear to see why… with a heartfelt tribute, a fantastic collab with promises of more to come, and an album of this magnitude… well, fans certainly can’t complain, to say the least! We in particular feel 100% fulfilled. But if you don’t, and you can’t help but scratch that itch and fulfil that craving for awesome thrashing even further… We got you covered. Dive into their social media, get updated and get hunting! We’ll certainly see you there.