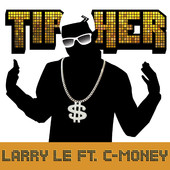 Blue Pie Larryle has released a new single ‘Tip Her’. Rap meets pop in this catchy Rnb  track as Larryle & C-money  finds a happy medium between seduction and distortion.

Larryle might be new to the scene but he has the gift of an old time rapper with his catchy chorus being ones the fans have grown to love. ‘Tip Her’ allows Rnb listeners to relate to the orginal sound they love.