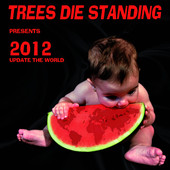 Trees Die Standing are an alternative rock band from Madrid. The first Release is “2012 – Update The World”. The album is pure indie alt rock and takes this to a new level for Spain. Released and out now on the new ConcertHouse Music Label in Canada and under the watchful eye of Ross Tonkin, the labels that founded this band are heading for bigger things.
With thunderous riffs and solid melody we know this one will put more holes in your ears and that’s what rock is all about. Distributed by Blue Pie from Australia for the world you can get this record at all leading digital retailers on the planet.

Be sure to grab a copy off iTunes today!