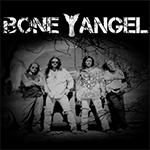 The Super Group “Bone Angel” was formed after retirement of Ozzie Osbourne in 1982. They worked together for a few years until Lowery left to join in a project entitled “Two”. During this short time a few songs were written and recorded, but never released. Bone Angel are Frank Star (Vocals), John Lowery aka John 5 (guitar) now with Marilyn Manson, Terry Nails (Bass) of Ozzie Osbourne and others, Randy Castillo (Drums) of Ozzie Osbourne and Steven Jones from the Sex Pistols.

This band of metal brothers bring it to the world with the force of a cruise missile ready to explode your eardrums into oblivion. Take a listen to what metal is all about and get this from the SOURCE. Bone Angel are: Frank Star (Vocals), John Lowery aka John 5 (guitar) now with Marilyn Manson, Terry Nails (Bass) of Ozzie Osbourne and others, Randy Castillo (Drums) of Ozzie Osbourne and Steven Jones from the Sex Pistols.

Although “Sin” never secured a recording deal they became extremely popular in Japan, Europe, and most of the Midwest securing a rather large fan base. Although they did record a demo for their first album it was unsuccessful. Frank then accepted an offer to record and tour with “The Four Horsemen” Frank’s other bands was Pirate, Bootleg, and L.A.M.F. In November 1995, while riding his motorcycle down the sunset strip, a drunk driver pulled out in front of Frank, who’s bike struck her car. Frank sustained massive head injuries, which ended his life as a performer and finally ended his life on June 18th, 1999.

John moved from Michigan to LA about 1989 at age 18 and started working as a session guitarist. His first local band was Alligator Soup, during which time he made numerous important contacts which led to various projects including TV show soundtracks, movie soundtracks including Speed 2: Cruise Control, and commercials and infomercials. At this point he was chosen to play for Lita Ford, opening for Kiss which led to him guest starring on Paul Stanley’s “Live to Win” album in 2006. John then did a short-lived stint with Bone Angel and Red Square Black, which produced a self-titled EP.

In 2000 John was chosen from a field of 2000 to play for a KD Lang tour. Following this John teamed up with ex-Judas Priest Rob Halford, along with Sid Riggs (drums) and James Wooley (bass), under the band name 2wo. They released 1 album entitled “Voyeurs” along with a video and then embarked on a world tour and participated in the Ozzfest that was cancelled, and the group disbanded.

John’s next project was to record on the David Lee Roth album “The DLR Band”. He later in2003 was invited to write with David Lee Roth to co write Thug Pop from the Diamond Dave Album. After touring with John Halford, John was picked up by Marilyn Manson who coined the name John 5. In 2005 John formed the band “Loser” followed by their debut album “Just Like You” Soon after the track “Disposable Sunshine” became part of the soundtrack for “The Fantastic Four”. John, during this time had been working with Rob Zombie, and conflicts in tour dates began to be a problem resulting in the shelving of Loser. John has continued to work with Rob Zombie as well as several solo works and an instructional video.

Terry started his career as a bass player by being introduced to the instrument by James Gurley of Big Brother & the Holding Company. As a studio musician he did work for many albums. He worked with Ozzie Osbourne on “Momma I’m comin’ Home”, “Same Old Desire”, “I Don’t want to Change the World”, “Zombie Stomp”, “Hell Raiser” and some others. During his studio time he also worked with The Pointer Sisters, Johnny Crash, among many others. Band credits include Tommy Tutone, Fire and Gasoline, which included collaboration by Nikki Sixx, Axyl Rose, Steve Jones (Sex Pistols) and members of the Cult.

Randy first aged 18, Randy played in a band called The Tabbs. In the late ’70s he joined The Wumblies (originally called Cottonmouth) and he moved to Espanola where they predominantly played covers of songs by Yes, Black Sabbath, Led Zeppelin and Jethro Tull at as many gigs as possible, including high school proms. The Wumblies toured around America, playing four 45-minute sets a night in clubs. Randy became an instant drumming icon in all cities toured. The band moved to Denver, Colorado where they fell apart in 1980.

In 1980, Randy recorded an LP with a band called The Offenders. The band also included Randy Rand of Autograph and Glenn Sherba of Badfinger. He moved to Los Angeles in 1981 with Albuquerque guitarist Tim Pierce On the recommendation of another musician, singer/songwriter Michael Goodroe, he joined pop band The Motels, whom Goodroe played bass for, when their drummer fell sick with a heart condition just as they were about to go on tour. Randy embarked on his first major arena tour with The Motels in support of The Cars.

In 1984, Randy was hired to play drums for Lita Ford and was featured on her Dancin’ On The Edge album. Lita introduced Randy to her boyfriend, Motley Crue bassist Nikki Sixx, and Nikki’s band mate Tommy Lee. Shortly after the “Dancin’ on the Edge” tour, Tommy called Randy from a party he was at with Ozzy Osbourne and told him Ozzy was looking for a new drummer. Randy was hired by Ozzy a couple months later and ended up staying with the Ozzy Osbourne band for ten years, recording five albums with Ozzy during that time. These were The Ultimate Sin (1986), No Rest for the Wicked (1988), an EP entitled Just Say Ozzy (1990), No More Tears (1991), and a double-disc live album, Live and Loud (1993).

After recording Ozzy’s live album in 1993, he joined Red Square Black. Castillo also briefly returned to Osbourne’s band in 1995 for a tour, and played drums on several tribute albums during this time. He played with Ronnie James Dio on a cover of Alice Cooper’s “Welcome To My Nightmare” on the Alice Cooper tribute album Humanary Stew and performed on a star-studded Def Leppard tribute album titled Leppardmania. The album featured John Corabi (Angora, The Scream, Mötley Crüe), Paul Shortino (Rough Cutt, Quiet Riot), Kevin DuBrow (Quiet Riot), Joe Leste (Bang Tango), and Jani Lane (Warrant, solo artist), among others. Guitar and bass duties were handled by Jerry Dixon and Erik Turner of Warrant, and Tracii Guns of the L.A. Guns and the original Guns in Guns N’ Roses.

In 1999, after Tommy Lee had left Mötley Crüe, Sharon Osbourne called Randy and told him about the job opening. Mötley Crüe gave him the job without an audition. He’d previously briefly played with Vince Neil as a touring drummer for the Vince Neil Band, and was an old friend of the band. His only recording with the band, 2000’s New Tattoo, was somewhat of a return to the classic Mötley Crüe sound. However, fan reaction was mixed and the album was not as successful as the band was hoping it would be. Still, there was excitement over the upcoming tour due to the revival in interest of many ’80s hard rock acts, and the band geared up for their “Maximum Rock” tour.

A couple of weeks before Mötley Crüe was set to tour the “New Tattoo” album, Randy became ill. The doctors discovered a duodenal ulcer that had ruptured his stomach and performed emergency surgery that saved Randy’s life. While taking time off from Mötley Crüe to recover from his surgery, Randy discovered a small lump on his jaw and a month later, after it had grown to roughly the size of a golf ball, he sought treatment and was diagnosed with Squamous cell Carcinoma, a common form of cancer. The cancer went into remission in mid-2001.

Within a few months the cancer returned, and a few days after returning to the doctors, Randy Castillo succumbed to cancer on March 26, 2002. He was 51 years old. During the final weeks of his life, Castillo had been working with ex-Ozzy Osbourne and Alice in Chains bassist Mike Inez on a new band and was in the process of hiring a singer.