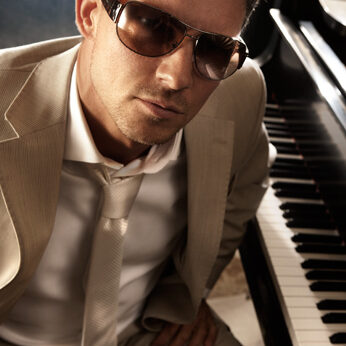 Erik Simins is one incredible Canadian artist, specialising in R&B, Pop, and Soul. Also known as Mr. Groove, his story is one that will paint a picture of who he is – someone who has been described as a man who will “have tea with the Queen, then kick the shit out of the guards”. He’s a pretty boy who’d be happy to rumble with the best of them.

There’s no joking about this talent from Toronto Canada, nor the impact he left on the 2010 renaissance. He’s got 70’s funk in his licks and a modern-day soul in his chops, and clear influences from the beats of John Anthony, wrap around his numerous albums. Erik’s fan base continues to grow, as Blue Pie Records also expands across the globe, as a leader in digital music distribution. Erik Simins is one of their most popular artists, grabbing a serious push through online promo. And it’s little wonder, once you take a look at his catalogue.

Starting off with a sizzling single released by Blue Pie, “Let’s Roll”, is seriously Old Skool! It’s almost on a 80’s pop tip, sampling locomotion-like sounds and Sly Fox 808 beats. “Let’s Roll” is the third single from his first album “Please do not disturb”, and is FULL of classic music gems. Erik takes you back to the days of crying over your first love in early highschool with “This Time”, to partying in your early 20’s with your girls with “Yesterday”, to playing hooky last Monday and spending the day in bed with ‘Ablerto’ who’s visiting from Italy with “Rainy Monday”. The hooks are contagious, and leave you singing “All at your Parent’s House” for about a week.

But those are just the tip of the iceberg. Erik’s most recent hit is a collaboration between Gabe Rizza and Key Loch, the duo behind late 2020 viral sensation “Where Is The Love”! The iconic “Dirty Anna” from the excellent “Please do not disturb” has been given new life through the triple threat of the three new remixes. The scratchy aesthetic of the original is transformed, but you’ll still be nodding your head just as much! Added synths and an electric increase in tempo will help bring home the cruisey nature of the original, fresh and newly realised in the EDM aesthetics of the modern world. Erik’s original vocals come through crystal clear, whether it be in the faithful Radio mix, or the trance-like Faceless mix, or the funky Dirty mix. The Radio and Dirty mixes embellish on the allure of the original track, taking it in similar yet different directions, and the Faceless mix just cranks the whole thing up to 11 and is sure to make any dance party happy! This marriage of skills between Key Loch, Gabe Rizza and Erik Simins is not to be understated, and is a sexy powerhouse that is sure to remind the new kids on the block of the titans who came before them…

Erik is a visionary artist, bringing the nostalgic and edgy tones of genres from the past into the forefront, shaking the music world to its core just as much as when the classics originally released. Whether he’s releasing his own new groundbreakers or being remixed by collaborating musicians with similar senses of aesthetic trailblazing, he’s a name you should keep an eye on in the music industry. Especially if you miss the bold and overstated approach of art from days gone by!