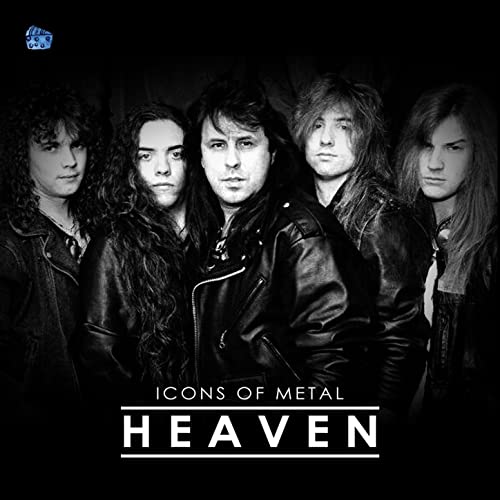 Heaven was a heavy metal band from Sydney, Australia that formed in 1980. The band recorded three albums and toured throughout the United States during the 1980s. The group’s original style was similar to that of AC/DC but in later years went in a more commercial heavy metal direction along the lines of Judas Priest.

The band was originally formed in Adelaide under the name Fat Lip, which featured Scottish-born Allan Fryer, bassist Laurie Marlow, and drummer Joe Turtur. Soon after the band moved to Sydney, AC/DC singer Bon Scott died in London and some unsubstantiated reports suggested that band was considering Fryer as a replacement. Fryer left Fat Lip and returned to Adelaide but he was never called upon to audition. Once back in Sydney, Fat Lip now consisted of Fryer and Marlow, Aldo Civitico (ex-Scandal) on drums and guitarist Bradford Kelly, originally from the band Swanee. Civitico dropped out just before the band signed its record deal, and Turtur joined the band. John Haese was also added as rhythm guitarist.

Shortly afterward, Fat Lip came to the attention of Michael Browning, a Sydney music industry figure who had managed AC/DC in the 1970s and had just started a new record label called Deluxe, to which he had signed INXS. Fat Lip began recording an album for Deluxe, but changed its name to Heaven during the sessions. The album, Twilight of Mischief, was preceded in late 1981 by a single, “Fantasy”, which would go on to enjoy new life in 2018 via new remixes. After “Fantasy”, a second single, “In the Beginning” became the album’s title track when it was released by CBS in the US under that name.

John Haese left Heaven after “In The Beginning” was released and he was replaced by Mick Cocks, formerly of Rose Tattoo. After a successful Australian tour supporting Iron Maiden, the band then went to the United States and also found some success there, particularly on the West Coast and toured with Judas Priest, Mötley Crüe, Black Sabbath and Kiss. They recorded a second album for RCA during 1983 called Where Angels Fear to Tread. The album was supported by a single, “Rock School” that received heavy airplay on MTV, and featured guest contributions from Ronnie James Dio, Lita Ford and Glenn Hughes. After this, Cocks and Turtur left Heaven.

In 1984, Fryer recruited drummer Tommy Dimitroff (in replace of original drummer Ronnie Zade) and returned to America to reform Heaven, this time with ex-Talas guitarist Mitch Perry and New York City musician Mark Cunningham who had most recently been in a band called Cathedral. Dennis Feldman, formerly of Ram-Jam and The Michael Schenker group also joined the new Heaven line-up on bass and the group recorded the album. Columbia A&R man, Mason Munoz, signed the band and recruited Paul O’Neill to produce and co-write the album Knocking on Heaven’s Door. The album’s title track was a heavy metal cover of the Bob Dylan song. However prior to completion, Munoz was replaced by a new A&R representative and Columbia brought in another mixer. After this, Fryer moved to Texas and forged ahead keeping the Heaven name alive with local talent such as Guitarist Perry Parris, Scott Howe, John Paul Dutton, Rodger “bam-bam” Weiss, Bryan Cameron and Timi Heiser. Nye Jones, Scott Cothren and Steve Dainhart recorded Time For Terror. The players from Austin Texas also recorded on the Mötley Crüe Tribute CD Home Sweet Home and was the number one voted song on the CD. The song was written by Allan Fryer and Tommy Lee and dedicated to Vince Neils’ daughter, Skylar Neil who died from cancer. All the CD proceeds went to the Skylar Neil Memorial Fund. On 4 June 2015 it was announced that Heaven’s vocalist, Allan Fryer, had died after a long battle with cancer. He was survived by his daughter, Kallan and four grandchildren.

In the modern era, “Fantasy” has encountered a whole new lease on life since being remixed by Country Boy AKA CB. CB’s incredible hit was released in 2018 and since then the song has viralled through global streaming networks. Fantasy is a summer vibe hip-hop banger that highlights CB’s skills when it comes to lyrics, vocals, and rap flow, and with Heaven’s Aussie hair metal backing up the crazy hooks, who couldn’t fall in love with it? This track was produced by Damien Reilly, Danny Saber, Country Boy, Mal Majik, and Jay Simpson, with beat and lyric collaborations once again featuring the one and only Heaven. Mixing was handled by Chris Garcia and Tom Polce, two legends from LA California. We at Blue Pie records reckon you can hear elements of the Beastie Boys inspiring this incredible track! Both Heaven and CB ought to be proud of this kicker.

The legacy of Heaven endures, entertaining new ears many years after members have left or passed away. Rumour has it that Guns N Roses themselves were influenced by Heaven. Even today, a new live mix of Fantasy is being created with Country Boy and the rest of the crew from the first time around. Fans of Heaven have a lot more listening to do before they themselves ascend to Heaven – because someone who listens to music this rockin’ couldn’t have committed a sin in their life! 😉