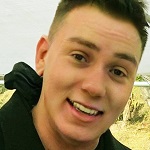 Kristopher Ryan, known as the Storyteller, was born in Southern California first emerged in 1994 as a competition dance skater. later, befriended by International Olympic Figure Skater Illa Killig and and he began compiling his own pop/dance remixes for various skating performances. At the age of 16 Ryan was remixing tracks in his bedroom and then gave them to djs who performed at the family owned nightclub. He then leaked the successful ones to various music blogs and P2P networks including Morpheus which launched his career.

Influenced by friends Michiel Verwest [Tiesto] and David Reed [Tritonal], his uplifting trance sound soon gained a huge following, while his passion as a raver and HHC Dj, established him underground.

“Kris Ryan has helped change and evolve electronic dance music from an underground movement to the massive festival now experienced throughout the world. Easily considered one of America’s most passionate representatives in the global EDM and Trance scene Ryan has undoubtedly been a major force in shaping the sound of club dance music for many of todays most famous artists throughout clubs, music festivals and the internet worldwide”. – says Karen Fernandez of Interscope Records.

His 2001 debut artist album Trance Nation produced eight top 20 singles, including five that held the #10 position on the trance chart for over three weeks. In September 2002, he released a follow-up album The Remixes which landed in the top 5 dance charts. Ryan has produced over 200 original productions and more than 3000 remixes and has been supported by other DJs like Armin van Buuren, Above & Beyond, Tiësto, Steve Aoki, Nicky Romero, Cash Cash, Ferry Corsten, Markus Schulz and more. Ryan has released over 42 albums to-date under various names, labels and genres, and has produced or remixed club dance tracks for artists from back in the day like Kate Ryan, Fragma, IIO Milk Inc, Soda Club, Rank 1, Daft Punk, Depeche Mode, Cher, Whitney Houston, Mariah Carey and the Petshop Boys to those most recently which include Lady Gaga, Katy Perry, Rihanna, Britney Spears, Enrique Iglesias, SIA, Taylor Swift, Fun and Alan Walker. As a Dj, he has worked with, remastered, produced, co-produced or remixed a variation of tracks with other dj/producers including Marco V, Sash, Andy Prinz, Paul Van Dyk, CJ Stone, DJ Sammy, Tiesto, Goerge Acosta and many many others.

Ryan has a worldwide fan base who have self-titled themselves “The Ryans”. Ryan is a regular headliner at music festivals around the world including Tomorrowland, Tomorrow World, Electric Daisy Carnival, Escape From Wonderland, Ultra Music Festival, Electric Zoo Festival, and Creamfields Australia.

In summer 2013, Ryan embarked on a major, 40+ city tour throughout North America until he ended up in Mexico where he purchased a a nightclub and announced he would establish K4Records and. committed himself to working with emerging artists from Mexico and abroad.

Ryan was also the owner of XMIX FM and The Mix 93.1 of New York. As one of the first pioneering djs to develop a terrestrial and internet radio station, Ryan did it big, launching multiple broadcast syndications including 3 global shows “A State of Readiness” “Dr. Mix” and “In the Mix”. by 2005 Ryan was syndicated on more then 252 stations in 43 different countries.

But Ryan’s career is not without loss and tragedy. In 2005 his career took a substantial hit, and was one felt throughout the Music Industry with tragic loss of his agent, manager and best friend Kevin Youngblood, who was killed by a drunk driver just hours before Christmas. Shortly after the accident Ryan was hospitalized having suffered a cerebral aneurysm and eventually lapsed into a coma. After an extensive recovery Ryan made a brief return to the tour circuit in 2010 with Lady Gaga and again in 2012-2013 with Rihanna, and Sia.

Looking back Ryan stated, “From here on out I’m on a mission….that every song every performance every person I meet, everything I do, will tell a story, and it will touch someone who will know at that very moment,that it was met for them”. Ryan’s most recent hit single remixes includes “Faded” by Alan Walker Ft. Sara Farell, “Roar” by Katy Perry, “Elastic Heart” and “Chandiller” by Sia and his Evolution Remix of Rihanna’s “Where have you Been” hit single.

Currently Ryan resides in the USA with his son. Focusing now on putting in studio time vs. performances he is working on several new projects including a new remix of Faded Ft. Sara Farell from Sweden, Maestro Chives from Austria and is working with several other up and coming producers and artists.