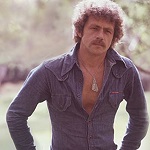 Lee Conway is a name that any connoisseur of Australian ’70s hits will know well. Born on March 10th in Poland, Conway broke into the country music circle with his debut, a sound that would roar up the Australian music charts: “Wanted Man”. “Wanted” turned out to be the right word to use – Conway won the award for “best single, album, and song” for his work “Stories We Could Tell” from the Australian Federation of Broadcasters. This was enough to kick start an international touring career, and foster a reputation for his distinctive voice and professional demeanour – this boy from Fitzroy was gonna travel far!

Borne on the wings of his professionalism and unique voice, Conway would soon become the face of the “International Festival of Country Music”, a noteworthy achievement for artists of the genre worldwide. He had caught the eye of the event organiser, the one and only Jerry Lee Lewis. Together with Waylon Jennings, Loretta Lynn, Bobby Bare and Rick Nelson, Conway wowed the British audience, and it was Conway who stood out from the glitzy crowd when he was presented with the “Most Promising Performer of Great Britain” Award at the London Palladium.

From there, this modern titan toppled his competition through talent and charisma, his single “All I want to Do in Life” outpacing the likes of Johnny Cash’s “Ghost Riders In The Sky” and Glen Campbell’s “California” on the radio charts. Conway put Australia on the global map for country music! Indeed, one could say Conway is Australia’s answer to Johnny Cash, the passion in their smooth voices clearly cut from the same cloth, but woven into two elegantly different things.

Conway then took a more relaxed approach to his career. Fame and success carry a high price after all, and management and personal problems threatened to topple Lee’s career. After representing Australia during the ANZAC Festival in Japan, Lee returned home and worked on his “Big Iron” album, and created the ill-fated “Cowboys & Engines” album which was never released due to management problems – the lovingly crafted album had thousands of copies warped and ruined! But he bounced back like a champion, the rugged Aussie cowboy now hosting the “Conway Country” TV show. As for “Cowboys & Engines”, you can even listen to it online nowadays, due to dedicated restoration efforts.

Conway’s career also took him to such lauded events as performing before Her Majesty Queen Elizabeth II, and teaming up with Col Elliott to write “Gone Fishin'”, a comedy advertisement jingle that soared to enormous popularity on CMTV. After all, Lee’s prolific song writing ability is not confined to country music, as for many years Lee has written and produced many award-winning television and radio jingles. But the accolades don’t stop there, as Lee Conway was immortalised by being inducted into the Hands of Fame in 1982, and to this day his music is still beloved the world over.

He redefined what Australian musicians can do, and reshaped the country genre as we know it with his creative passion and storied journey through music. He has been regarded as one of Australia’s most loved and respected country music artists and carved a special place in the hearts of all music fans.

Conway’s storied history is one that Country fans and Aussie music fans alike will be familiar with. This timeline outlines the journeys he’s been on and the music he has crafted throughout his notable career.