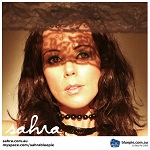 Boogie on down to ipluggers to hear more of Sahra!

Sahra fans, you might want to hold your breath in anticipation! ipluggers is going to be plugging Boogie Oogie Oogie on radio stations internationally! 35,000 stations around the world will have the chance to broadcast Boogie Oogie Oogie’s catchy 70s vibes to eager listeners late February 2020!

A featuring artist for the flagship song “Destiny”, from the hit movie “Dealing With Destiny”, Sahra has often lent her voice to ambitious projects, and this is no exception. Late February is now something we’ll be distracted by as it approaches – like a kid waiting to open their Christmas presents!

Sahra and Blue Pie Director, Damien Reilly, first met over 24 years ago in 1996 and they have remained friends ever since. The duo began writing in 1997 and put together their first song ” One Sweet Day ” with Producer, Phil Munro. Since that time, Sahra , Damien and Phil set out to create a solid body of songs that would be timeless and that would be true to Sahra’s vocal ability. This became the Girl Parts album, which you can listen to on all major retailers!

The first single they released was a remake of the 1978 R&B number one hit Boogie Oogie Oogie by ‘A Taste of Honey’. The songs on GIRL PARTS began with Damien playing his guitar and Sahra adding the melody and lyrics. It has since grown into a writing trio combining the talents of Phil as Producer, arranger and songwriter.

Sahra’s angelic voice, coupled with her ability to take you away to the true essence of the songs that she sings makes this album very unique. She has that special magic that stars possess and she truly shines on her own. That’s why it’s so exciting that Boogie Oogie Oogie is going to get its time in the limelight like this! Let’s all tune in and wish Sahra the best!