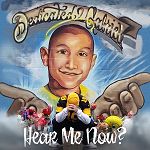 Can you hear him? Down3r's heartfelt cry!

All of DL Down3r’s tracks are something special. But this latest one in particular is so emotionally charged, it might just have what it takes to rival Wear Me Down in terms of tearjerker factor! What do you reckon? See for yourself…

The song comes from Down3r’s heart upon hearing the story of Gabriel Fernandez, a child who endured multiple instances of hatred and abuse before being murdered by those who were meant to care for him. Recently surging to fame due to the true crime documentary on Netflix, “Trials of Gabriel Fernandez”, the child has become an icon to represent the failure of America’s law enforcement, and the hatred and abuse that lives in the hearts of supposed caregivers across society.
Down3r, along with Uno and Jay Tablet, has expressed his opinions on this gruesome topic, while protesting the hatred that Gabriel endured, sending his love through music toward the unfortunate soul, may he rest in peace. The music video is just as heartwrenching as the song, and is sure to at least make you stop and think. Gabriel didn’t have a voice while he was alive. Now, Down3r has done his best to give him one in death. So, can you hear Gabriel now?

If you wanted to catch the video on a different platform or spread it round to others so it can touch their hearts too, check these links.

Down3r has always been one to express his emotions with pride. Just look at the message behind Suga Boom Boom, or the raw power of Wear Me Down! Well this is another hard hitting blow straight from his heart that his fans are sure to enjoy, and that newcomers who discovered this track through the legacy of Gabriel are sure to resonate with.

And for the few of you in the readerbase who are STILL unlucky enough to have not heard of Down3r after all this time and aren’t sure where to start, consider this an introduction to the rest of your hip hop life!