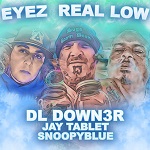 15,300 plays. Not a shabby figure in the least, especially for a Spotify track that was released so recently! Eyez Real Low is a blapper and a half, and as you can clearly see, it has the world’s eyes on it right now!

It’s got some good momentum on it right now, and 15k is JUST Spotify! Combining those plays with other platforms and the picture forms ever clearer – this is one to keep your eyes on! Will it become another excellent standout hit like Wear Me Down or Road Ahead? It’s well on the way to becoming that, we think! Will it reach the colossal echelon of the one and only Suga Boom Boom? Might be a long way, considering just how enormous this track is! But we’re pretty optimistic… I mean, it’s Down3r after all!
But what about the track itself? DL Down3r, Jay Tablet and Snoopyblue all complement each other perfectly in Eyez Real Low with their different styles of flow and vocals. Snoopyblue and Jay Tablet are bringing the pain with their excellent synergy and DL’s charisma is as fresh as always. The beat goes hard, just as hard as the numbers keep climbing, and we’ll be monitoring the success of this one closely! How high can it climb? Well, we’ll all see. Until then, this is yet another sweet track to add to your cruising playlists. You can’t help but want to go out to the streets in a new whip and bump this one real loud. All of us at Blue Pie sure are!
Through fierce and funky west coast rap, Down3r shares his prolific work with the rest of the world, and the stage with west coast rap legends such as Coolio, Brown Boy, Jay Tablet, Lil Young, Snoopyblue, Baby Bash, Steel City Hustlers, King Z and DJ Kane to name a few. From powerful messages, lyrical poetry and sharp comments on society, to G-funk and Trap/EDM hype songs, he proves that age and experience is the opposite of a liability in today’s rap game. This little number is just another flex from his talented repertoire! It’s out on all major online retailers and streaming services, so get ready to buy a new pair of speakers!
DL DOWN3R | OFFICIAL LINKS:
Back