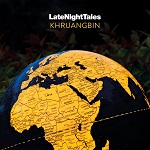 Blue Pie recently acquired some very special rights – those to the vinyl and album compilation known as Late Night Tales: Khruangbin! Our artist Maxwell Udoh features on track six, “I Like It (Don’t Stop)”.

Compiled by Khruangbin, this album is the latest in the Late Night Tales series, a saga which has featured heavy hitting names like Jamiroquai and Snow Patrol in the past. Blue Pie are honoured to have Maxwell Udoh considered for this, especially considering the success he’s experienced on our Sound Waves From Africa compilations! The man is a reggae legend who just won’t stop being seen as the cream of the crop, even posthumously! Fans of Maxwell will be proud that he was chosen as a representative of Nigeria for the album. As the CD blurb says:

“We definitely wanted to cover as much global territory as possible; so it was the globe and then home. We wanted to show the treasures from our hometown, or people from our hometown that the rest of the world probably doesn’t know. Then these gems from across the world, showcasing them in the same way. That’s what makes Khruangbin Khruangbin, the stubbornness about being so hometown-centric. But what makes Houston is this constant international influence; that’s the gulf stream, bringing it right into the city.”

Being featured on the same album as Kool And The Gang is a great accreditation for Maxwell, and a big deal to say the least!

A natural with music ever since he was a child, Maxwell Udoh was a reggae superstar for Nigeria during the 80s and 90s, and even beyond Nigeria. “Forward Ever, Backward Never” put him on the global map, and he is renowned as an advocate for social justice, as well as one of the first few Africans to sing authentic reggae. Fresh from our collaborations with Nedjon and the Iroking catalogue, “I Like It (Don’t Stop)” is our personal favourite track of his, and it’s wonderful to see it make it onto this prestigious collaboration after our own Sound Waves From Africa!

Click here to check out Sound Waves From Africa Vol. 26, and see what other amazing African artists are out there and holding the same level of prestige as the one and only Rasman Maxwell Udoh, may he rest in peace!