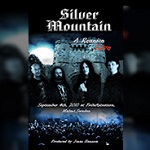 Often overlooked in the evolutionary process of what would come to be known as neo-classical heavy metal, Sweden’s Silver Mountain are one of the great Scandinavian cult bands of the 1980s. Named for the famous song by Ritchie Blackmore’s Rainbow, Silver Mountain was first assembled in 1978 by vocalist/guitarist Jonas Hansson, guitarist Morgan Alm, bassist Ingemar Stenquist and drummer Marten Hedener; but this lineup would be short-lived, splintering after releasing just one single called “Man of No Present Existence” in 1979 (now collectors-item).

At one point, the band folded, then after many ups and downs all four members of the group’s “classic” Shakin’ Brains decided to reconvene in 2001, turn back the clock, and record the not-surprisingly titled Breakin’ Chains LP for old time’s sake. In 2010 a Facebook group called “We who want to see Silver Mountain Live in Malmö” surfaced and the band decided to get together in various line-ups to do this show.

The show was filmed and resulted in: “Silver Mountain A reunion Live 2010”. After that show Silver Mountain decided to continue and is currently working on a new studio-album. For more information go to www.silvermountainrules.com or search “SILVER MOUNTAIN” on Google.

Silver Mountain are a hidden gem, and while their fanbase is not as colossal as that of some others, you can clearly see those who follow them are devoted, and for good reason. But perhaps it’s best at times like this to let their music do the talking for them.

And if that somehow still didn’t satisfy your urge to rock out to amazing music, our Vimeo has you covered! Watch Silver Mountain flex their best on Metal Central TV!

What are you waiting for? Let’s get thrashing!

That was excerpts from Metal Central, a show where you can discover a variety of metal and rock acts!

But say you wanted to focus on Silver Mountain alone… we also have you covered. Thanks to Qello!

Legendary Swedish metallers SILVER MOUNTAIN had their September 4, 2010 reunion show at Friluftsteatern in in Malm, Sweden filmed for release. The concert featured five different lineups and was captured using five cameras and a 24-track unit. This resulted in a 117-minute-long film, “A Reunion Live”. And even if you missed it in real life, or were feeling nostalgic and wanted to rewatch it if you were lucky enough to experience it, just click on that link and you can experience it in the comfort of your home at any time! Go check it out!

Still not enough? Click on these links to check out Silver Mountain’s Apple Music range and their official website! We know it’s hard to scratch the itch for the best rock and roll experience you can find, but we’re confident with Silver Mountain’s help (and thanks to the quality of the work they produce) you’ll get it eventually… if only for a short while, before you return to listen to them again and again. They’ll do that to ya. They did to us. And we wouldn’t have it any other way.