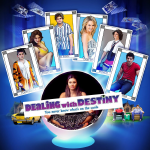 Last year was the ten year anniversary of Dealing With Destiny, an independent Australian film that spent a year in production in 2010, and officially released in 2011. The soundtrack for the flick sampled from quite a few of the artists on our label, and today we wanted to look back at one in particular – the infectious Smile Baby by Funky P, with a tantalising music video to go along with it!

This is a smooth swinging song with a jazzy brass section, and you’ll find yourself snapping along to it without even realising it – the combinations of those smooth drums and occasional bongo stings, the rhythm is hard to resist in this one. With an energising tempo, alluring lyrics and a funky bass, this track is sure to make you smile, baby! And the rest of the soundtrack is just as good as this, for all sorts of reasons unique to each individual track.

But what of the film itself that all this came from? This quirky Aussie comedy is about a group of good buddies on their last day of University together. Blake, Lloyd, Vinnie, and Ricardo have to deal with an assortment of challenges that are thrown in their way, such as final exams, college pranks, attack dogs, rivalries and, of course, girl troubles. Lloyd suspects Blake of making a move on his new girlfriend Zara, Ricardo falls in lust with the sexy gym girl, and Vinnie is more in love with Betsy, his yellow 1969 fiat sports car. And what about the arrival of the cute nurse called Destiny? You’ll have to find out. The World (as in the planet, not the Tarot’s World Arcana) has had the ability to download or stream the film for many years now, via the AMAZON VOD platform. So, check out the trailer and see if you’re going to be a new member of the many Dealing With Destiny Lovers! (Again, not the Tarot Lovers.)

You can divine into the film itself by clicking here! Follow the turning of the tarot cards as Zara uses her self-styled cosmic powers to predict their future pathways. Amazingly, everything seems to be coming perfectly true- or is there a surprise at the bottom of the deck?

The film is directed by Colm O’Murchu (“The Makeover”), and stars Clayton Moss, Roger Sciberras (“Fool’s Gold”), Catherine Jermanus, and even Luke Arnold, (“Broken Hill”) you can see that this film may have just had its hand in kickstarting a few careers! Luke Arnold in particular is a promising name to read on any casting list!

The film’s killer soundtrack has also kickstarted some tracks. The involvement of now huge names from our catalogue like Sam Pollard goes without saying, but the topic of today’s story is also doing quite well due to the film’s success! Funky P’s Smile Baby is up to over 1 million streams and is growing more and more!

We’re loving any opportunity we can get to take a retrospective look at both Smile Baby and Dealing With Destiny, as even to this day they have a special place in our memories. If you haven’t seen the movie yet, who knows, you may feel the same once you do! So get your hands on this zany “feel good” movie, and have a great time taking a journey with us through friendship, love, and destiny! Your fate is but one click of this link away… the prophecy foretells that you can find the links to download the film there on all major platforms, as well as all social media for the film itself. See past the mist, and find your destiny…

And check out more Funky P here, and see more groovy tracks made by the creator of Smile Baby!