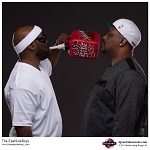 The Eastside Boyz ain't back, they just never left!

Straight from the golden era of crunk, you’d be forgiven if you thought The Eastside Boyz have been a bit quiet lately. But we’re here to remind you that they never left, and indeed, they are STILL around and kicking!

The Eastside Boyz are one of those hip hop groups that have earned the elusive status of “permanent classics”. Most of their work, you probably recognise from the late 90s and early 2000s, and even hearing their name might take your mind back into that crisp, youthful era that many of you readers would have either grown up with or lived through as a fresh part of the whole movement! Either way, you ain’t immune to nostalgia, and “All Stars” is here to hit you hard in the face with that.

16 sweet tracks that’ll throw you back to the (g)old days of the Boyz, as well as some modern classics in the form of GETTEM, the promo they did with the Atlanta Falcons! Well, you heard the song. Get up, fans on the East coast! Rep that red and black! GETTEM!

But if you’re in the mood for pure nostalgia and wanna save venturing into some of the new stuff for a bit later, we understand. An old song is like comfort food sometimes, you know exactly what’s gonna happen, but still you wanna relive it again and again, that fuzzy throwback feeling. Well, for you conneiseurs of the finer things, we have GREATEST HITS!

Including a cameo by MC Breed, this album features a whopping 17 tracks of throwbacks and good times for the crunk court. Time to bow down – your kings of crunk have returned! But that’s not right… because really, they never left! All the better for us. And if you REALLY need more, so much more that you might go BERSERK if you gotta wait any longer… well, click here. And enjoy the goodness that awaits any fans of good music worldwide!

Be sure to check out some of the Boyz’s other tracks:
Soundcloud: www.soundcloud.com/eastsideboyz-634813867
Spotify: play.spotify.com/artist/2JtgaGN6YYvAEtmqS5Zz9z
iTunes: itunes.apple.com/us/artist/the-east-side-boyz/id158124103