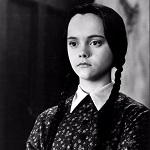 We may just have the newest viral sensation on our hands, courtesy of everyone’s favourite spooky family, the Addams Family, and Suga Boom Boom!

Wednesday Addams went live on Down3r’s Facebook and on our Youtube. Funnily enough, the video went live this Wednesday, and showcases young Wednesday booming it up to Suga Boom Boom, and the fans loved every second of it!

A fan submitted meme like this hasn’t seen this kind of attention since The Marcel Effect of a few weeks ago!

We’re pretty confident that Wednesday booming out to Suga Boom Boom will catch up and maybe even overtake the Marcel Effect, given how quickly it’s risen in views already! Just goes to show you what fans can do, right? Not only in terms of the creative content they put out and sent to us out of their sheer enthusiasm for the music they loved, but the massive publicity push behind them that’s bringing entertainment and laughter to Down3r fans, new and established, the world over!

But in case you’ve been living under a rock, you might be wondering who DL is and why you should check out the viral sensations his music has been kickstarting at all? Perhaps wondering why you should even bother checking his social media or tracking his tours on BandsInTown, and other such means of connection? Wonder no further- consider this a tutorial in supreme hip hop!