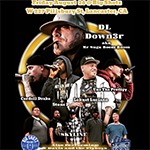 Friday August 26th is your chance to be a Big Shot with DL Down3r and crew! CALIFORNIA!

Uno Tha Prodigy has given us some brilliant news for what him and the Suga Boom Boom crew are planning! The details are right here for you, and it’s gonna be big!

This August! The 26th, out at Lancaster, Pillsbury Street. Will you be going there? If so, better grab your tickets soon! Uno Tha Prodigy had this to say about the pending tour:
“

We’re gonna be at @bigshotzbg August 26th. I’m very excited about this one right here! Not only do I get to perform with my boys DL Down3r, @crippledthegoat, @cordelldrakemusic, and @rollstonewayz, but I also get to perform with my brothers sky.line09 as well! It’s going to be a dope night with some real dope vibes from Hip Hop to Rock/Rap and more! The homies and I can’t wait to rock with y’all!!!”
If this event is anything like the last one where the crew got together, we’re sure it’s gonna blow the roof off Cali! Can’t wait to see you there! But what about those readers who haven’t heard about these talented rollers and what they do?

We’ve talked a big game about a few of these artists in particular in the past, and a refresher course might be just the thing you need if you’re indecisive about buying tickets for this once-in-a-lifetime event. Down3r and Uno Tha Prodigy have rocked many awesome and emotional singles together before, and the recent UNDEFEATED with Cordell Drake and Stone P is absolutely killer. We know T. Davis from his collaboration with DL Down3r and Lokust Luciano, that being the mellow track High On You, and of course Lokust Luciano has been turning heads his way with his latest releases all over the shop.

From powerful messages, lyrical poetry and sharp comments on society, to G-funk and Trap/EDM hype songs, he proves that age and experience is the opposite of a liability in today’s rap game. Blast it loud, get ready to feel something, and rest assured knowing that hip hop never died! For evidence of that, just be there on August 26th and be ready for Lancaster to get a wakeup call like it’s never had before!