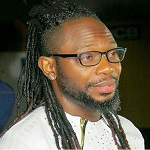 OJB Jezreel. An influence on young kids, up-and-coming artists, and music lovers of all shapes and sizes… an artist who will be sadly missed. In 2016 Jezreel passed away, and Nedjon Instrumental will be bringing his estate to the label, along with his son Ayo Jezreel‘s work. Through this, we can rest assured that even though he’s not here in person, his music will live on, and his son will carry the torch through his own music. The legacy is passed on from father to son.

Babatunde Okungbowa a.k.a. OJB Jezreel was born on July 4, 1966 in Lagos to Chief Anthony Okungbowa & Isabella Abiodun Okungbowa (Nee Pinheiro) in a matrimony that produced 5 others. He was the last child of his mother.

He graduated from Federal Government College, Ijanikin in 1986 where he organized a music concert while he was a student of the school.

He furthered his education at Lagos College of Education and Liter-way College, Holland, Year 1987-1990. However, in true pursuit of his passion and a real career, he decided to follow his path in life as an artiste/music producer.

For the prolific producer, music started back in 1986. The artiste started making beats in back room studios, first in his Surulere neighbourhood and later in other parts of the city.

OJB Jezreel was a seasoned producer and a great musician. Over the years, he has produced some of the greatest hit albums and singles in the history of R&B hip-hop music in the entertainment scene in Africa.

He worked with 2face Idibia which is the greatest thing that came out of Africa to the world. OJB Jezreel single handedly produced ‘Face 2 Face‘, the album that contained tracks like African Queen that took 2face to another level.

He has worked with Beenie Man, a Jamaican American-based musician.

He made so much impact in the music industry thereby making Nigeria the cradle of entertainment in Africa also emerging a spotlight in Africa, he remains the greatest producer ever to emerge from the continent Africa.

As a musician he is one of the greatest vocalists and by virtue of years of experience as a producer he has been able to impact his gathered knowledge into his style of music thereby making him Mr. Versatile in his last album ‘No Drama’ with great hit songs like ‘Searching’ and ‘Pretete’ which created so much impact that it sold close to one million copies in less than 4 weeks without the push and promotion of a record label. This is why you might just call OJB “Mr. Versatile”.

An avid believer in God, Jezreel primarily made gospel music. His music was frequently sampled by newcomers to the industry, and had good reason to be – a song created with devotion and passion is eternal, and has the most cause to be used in such a way. Each time a song of his was sampled, it not only complemented his own music, but the music it was added to, making it a fitting tribute to the mastery of his work. He truly was one of Nigeria’s greatest worshippers, and pulled in a crowd to match this reputation every time! His son continues this legacy today with his own crowds.

A religious man like OJB would probably appreciate the legacy he left behind, as he debatably lives on in more ways than one – he lives on strongly through his memorable tracks. As newer, younger musicians sample him, he will never truly die. A passionate musician ensures one thing – they are their music. OJB Jezreel was a living example of this, and it can clearly still be seen to be true today. This is why we celebrate Ayo Jezreel’s music – the new stage of inspiration from this legacy. Next time you listen to one of his tracks or pray for him, remember that. And remember a great man.