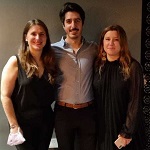 Our music has been reaching many more ears as of late, and we’re excited to share with you just how far our songs have gone! In Latin America in particular, various artists from across both the Blue Pie and DJ Central catalogues have been shaking numerous radio stations to the core, and plenty of other progress in other areas has also been made! Let’s check out some of the milestones we have, and the incredible stations that have been playing us!

Sabrina Di Claudio and Anthony Milton have both been working very hard to get this level of exposure with radio stations both in Latin America and across the world at large. Among these radio appearances and podcasts were uploads to Youtube, Deezer, and many other news articles and social media shoutouts! The viral hit “Where Is The Love” by Key Loch in particular was a rousing success, seeing three plays per week on stations such as Revista Digital – Musicas Del Mundo! We’ve had interviews, playlist featurings, magazine articles, and every kind of online promo you can think of – we’d be here all day if we listed every single thing! But in the end, one thing is for sure: people love this catalogue, and it’s clear to see!

With their efforts on the DJ Central TV show season 6, as well as their grassroots music artist recruitment efforts, the LATAM team are covering all bases and are trailblazing like nothing before! Look out Latin America!

If you’re in Latin America and are aspiring to work in the music world… well, you saw the trailer. What are you waiting for? Contact Blue Pie, DJ Central, or Ordior at these links below – whether you’re interested in music distribution, EDM or hip hop, or rights support along the lines of Ordior’s duties! Whatever niche you fill, whatever music you have to bring to the table… well, this trailer is clearly a call to action. If you wanted to join a gung-ho team like this that gets the ball rolling like Anthony, Sabrina, and the rest of the group have, who could blame you?

So what are you waiting for? Shoot your shot, just like the LATAM team clearly have. Even if you jump for the stars and miss, you’re still going to land on the moon!

The Ray Vanderby Chronicles – learn more about the man himself!

Jul
Dave Evans rocking Mexico in 2021 and bringing us a new single!
Jun
If you thought Down3r’s tours for 2021 were all announced, surprise! 08.20 at Wicker Park, Chicago!
Jun
Down3r’s got a surprise for you on the 9th of October! Budweiser nats: a show and a race!
Feb
Swanee at Lizotte’s! A meet-and-greet for all true Australian rockers!
View More