Henry Turner Jr Day is BACK November 2022! Get yourself down to Baton Rouge!

Last time we checked in on Henry Turner Jr., we had a look at who he was as a person and what he means to his community: in a sense we took time to meet him. The first thing you should know about who Henry is, is the annual festival held in his name: Henry Turner Jr. Day, also known as HTJ Day! Well we have some great news for fans of this event… IT’S BACK, THIS NOVEMBER!

As you can tell, we’re pretty excited. Past outings on Henry Turner Jr. day have proven to be a wonderful jazzy time for all, as you might expect if you’ve checked out his catalogue before.

Sampling that playlist should give you an idea as to his musical prowess. If you wanted to find out more about him, or perhaps engage with a legend that already lives strongly in your heart, this handy documentary is the place to be!

If you wanted to check it out, Vimeo is the quickest place, so grab your popcorn and settle in. Or if you’re a collector and have a heart as gold as Henry’s, purchasing and owning the film via Pivotshare will help ensure his musical legend can endure!

Henry Turner Jr. has made great steps to improve his community and give where he can. He’s even been awarded an honourary Louisiana ambassadorship in recognition of his efforts! Around his neck of the woods, he’s a living legend. Not only is he a musician but also a composer, producer and promoter. Henry has been accredited to creating a unique and contemporary music style labelled as a mixture of Louisiana Reggae, Soul, Funk and Blues. He possesses a rich baritone voice which produces a soulful and emotive tone to his ballads and catchy dance songs. Henry’s ability to incorporate a mixture of blues, soul and funk in his guitar compositions has resulted in a series of unique, upbeat and unforgettable songs. But don’t just take our word for it! It is said you can find Henry at the same place every Thursday night, in his listening room doing his thing. A man of the community, Henry brings something truly special to the scene both online and offline, and makes every Thursday night special for his pals! Check out this image to see more! 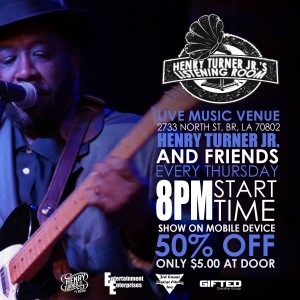 But the weekly listening room shows are one thing, an entire festival is another! The last time we covered Henry Turner Jr. day when it was on, it was an awesome time and we’re sure it’ll be the same this year. But the festival needs your help! Share Henry’s post about it all around the world and we’ll see you on the day itself! The details about the when and where are all in Henry’s original post, and if you need more info, just ask him on Facebook. So, until then, we’ll see you on November in Baton Rouge!

As a show business veteran and entrepreneur, Turner Jr.’s vision is and always will be to share the love he has for his home state of Louisiana, his hometown of Baton Rouge and to introduce the cultural diversity of his world into the world in general. Absolutely admirable- this is a goal that will bring happiness to many. And indeed it has, to the point that an entire day is dedicated to him and his work annually, sharing the culture and music of Louisiana. And of course, the man himself is deeply involved with its organisation. We’re hoping by discovering him, you’ll gain a greater appreciation for the wonderful music that’s created in his soulful part of the world!