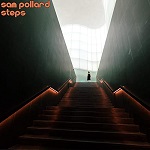 Sam Pollard’s Steps album has been on our radars for the longest time now, and it’s still kicking in a big way! How big? How’s 200K overall sound?

You may have heard of Steps. Your friends may have heard by Steps. We did a track-by-track review of it back in the day. It’s only fitting, considering that it’s a concept album that tells a story from the first track to the last track. Gotta take it all as intended. Well, Steps is the success story today because it has been doing exceptionally well on both Spotify and Airplay Buzz! With well over 12k streams on EVERY SINGLE ONE of its Spotify tracks and 55+ spins on all of Airplay Buzz’s radio stations along with Sam’s other killer hit, World Of Difference! And this success is well deserved. This is an excellent work by a truly passionate musical individual. We’ll let it speak for itself for anyone not caught up to speed.

It’s a beautiful thing to see an artist’s vision becoming recognised, and it’s our pleasure to be driving the campaign that takes Sam one step further towards this in the public eye. And with how emotional the hits are, it’s no wonder they lend themselves so well to Tik Toks like these that we’ve made!

That Tik Tok featured both World Of Difference and “Don’t Walk Away” from Steps. Sam’s work lends itself well to the viral marketing format that is Tik Tok, and you can even see how well that little adventure did by reading here! Fun fact: the dog’s name is Sam too!

Steps is an album that is a trip into emotional exploration, with many detours into fun along the way. The lighthearted nature of the instrumental carries the album well and allows it to explore the themes it does without ever becoming too morbid or self indulgent. Following in the footsteps of artists like Ben Folds Five, Queen, Missy Higgins, Delta Goodrem, Martha Wainwright, Crowded House, Paul McCartney, Green Day, and even Simple Plan, Sam Pollard has taken inspiration, but not imitation, from the masterful work of his contemporaries and from those who set the standards before his time. With emotional highs and lows and catchy music all throughout, this set of Steps will take you up, down, and to new places. A journey worth taking for any fan of chill, catchy music and laid back modern pop rock! So it’s no wonder that the world is loving it so much lately.

But that’s not where it ends for Sam. Of course we can’t run a story on him without mentioning his most well-known track, World Of Difference!

When factoring this in too, across multiple platforms Sam’s work is truly booming, reaching well in excess of 200K plays! Sam’s really getting his work out there, which is well deserved. Creations with this much passion put into them should be recognised after all! And as far as Sam goes, this is just the beginning… there’s plenty more to discover in his catalogue!