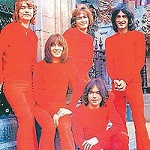 Build Me Up Buttercup, The Coca Cola Ad, and more "The Valentines" throwbacks!

If you’ve been paying attention to The Valentines’ Spotify profile recently, you probably would have seen some interesting digital remasters uploaded for the modern era! We already covered the eponymous The Valentines EP and Peculiar Hole in the Sky, containing the ever-popular “Every Day I Have To Cry”, and now it’s time to examine what else the profile has on offer, including recent additions! In this particular visit, we have two avenues in memory lane we’d like to examine first up: those being  Build Me Up Buttercup, and the commercial that The Valentines did for Coca Cola! Let’s have a gander.

Straight from Clarion Records, we at Blue Pie are excited to publish these works and send you on a nostalgic trip into AC/DC prehistory! Clarion records was Perth’s only record company back in the day, and this exclusive company still noticed the talents of The Valentines, as the world would soon after! After all, you have to make it in a big way to get a commercial deal with the giant known as Coca Cola…

And it’s little wonder that Coke noticed them, really… songs of the quality showcased in Build Me Up Buttercup really tend to stand out!

You’ll probably know The Valentines best for their lead singers, Vince Lovegrove and of course Bon Scott himself. The latter in particular needs no introduction, due to his fame with AC/DC. But before that came The Valentines, as well as the secret uncovered song “Round And Round And Round”. We’ve often sung the praises of this one.

The Valentines formed in Perth in mid-1966, bringing together members of three leading local beat groups: Scott and Milson were from The Spektors, Lovegrove, Ward and Cooksey from The Winztons, and Findlay from top WA band Ray Hoff & The Off Beats. Playing a mixture of soul, R&B and mod covers, by the start of 1967 they were already Perth’s top group. A major drawcard was the double-vocal attack of dynamic frontmen Bon Scott and Vince Lovegrove, and within a few weeks of their live debut they were packing in crowds! And with the sweet 60s styling of singles like Build Me Up Buttercup (which has a title VERY reminiscent of the era!) you can just picture yourself in those crowds, soaking in the atmosphere. Or maybe you were present in the crowds, back in the day? Let us know if you were lucky enough, readers!

Which brings us to our next stop on our The Valentines retrospective tour. If you were present in those crowds back then, you reckon you’d be classified as a groovy old rocker? Well, Valentines fans are ageless, but strictly off the books, what do you think? Hardcore fans probably can already see where this one is going: presenting My Old Man’s a Groovy Old Man! Both the original single, and the EP that collects a few of the band’s other hits together not covered in Peculiar Hole in the Sky!

Truly some groovy 60s classics here, encompassing the style in a memorable way that sends you straight back in time effortlessly! Keen-eyed fans may have also noticed one particular track in the EP that really helped put The Valentines on the map – the iconic Nick Nack Paddy Wack!

Towards the end of the swingin’ decade came this excellent re-imagining of a childhood classic, with a twist – you can still hear the old school lyrics, but mixed in are nods to the romantic intent the song held in the hands of The Valentines! Just look at Bon singing his heart out over it – that’s how you know it’s from deep down!

These lyrics may have been sung to many of you as nursery rhymes back in the day, and you may have been serenaded with them… or even The Valentines’ version of them! The vintage lyrics’ history is mixed across several accounts, and many different interpretations now conflict each other. “Knick knacks” were often sold by Irish folk during famine, and you can therefore infer what a “paddywhack” would be when it involves door-to-door beggars! These old men were sent rolling home quite promptly with a short sharp whack. Another interpretation is what it means to “play” one and two and three, and the use of “bones” that the dog might have could be a clue. Playing bones can be seen in action here! An old and musical practice, one can imagine merriment being found back in the day by playing the bones and singing this song along to the rhythm.

And here it is now, in modern times, remastered digitally along with the rest of The Valentines’ catalogue! And that’s what this new release article is celebrating today – the Spotify profile that holds so many Valentines classics, playing one back in olden times, then playing two back in the 60s, and now playing three in 2021 with remastered versions of true classics! So here’s the full collection, which is the best way to “give the dog a bone” that we can think of!

It’s great to see that the complete work of the band has been digitally restored so long time fans can indulge in that distinct twang of the 60s rock sound… nothing else like it! The work The Valentines did together proved to serve as a wonderful launchpad for the careers that everyone knows and loves, and will really help any newcomer fans of rock and pop understand just where the one and only Bon came from… and why he changed the world of music as much as he did.