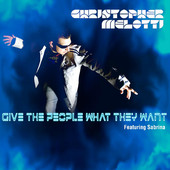 Chris Melotti releases dance track "Give The People What They Want"!

Christopher Melotti is one of Australia’s most motivated, down to earth, and musically engaging talents of the century.

The latest hit from Chris is his powerful dance track “Give The People What They Want” featuring Sabrina Fustaire. Produced by Chris Garcia and Damien Reilly, the song showcases two extremes of the world and the way people live in it. Juxtaposing the glamorous lifestyle of the “dance music” culture and the poverty and riots that the majority of the world’s popularity undergo every day.

The clip is to be featured on dance music television program “DJ Central”, and is also live on YouTube for the world!

Be sure to look out for upcoming releases and from Chris Melotti, and more information at his Official Website!