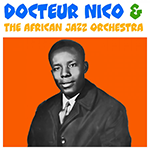 Docteur Nico and His Orchestra show off some classic Soukous delight!

Docteur Nico, AKA Nicolas Kasanda wa Mikalay, was one of the greatest trailblazers of music from the Democratic Republic of the Congo, and an avid musical performer since the age of 14. The Soukous movement of dance and musical style is owed largely to him, and his guitar skills are legendary. So much so that the one and only Jimi Hendrix visited him during one of his Paris tours, and his 32 years of music produced by his storied career have earned a permanent place in the annals of Congolese music legends, especially ones associated with France.

Today, we want to show you why. Presenting Docteur Nico & The African Jazz Orchestra! Featuring some of the greatest talent to ever come out of the Congo, this album shows off exactly why Soukous is so revered in the Congolese cultural zeitgeist!

Featuring two juggernauts of their era, this album is the ultimate treat to anyone who loves Soukous to death. The genre combines European influences with traditional Congolese styles, introducing jazzy and brassy sounds that ultimately produces an exotic and classy fusion of cultures. It also shares a name with a style of dance, which goes hand in hand with the musical genre’s identity, and nowadays is generally the more popular use of the term. Still, no matter whether the word “Soukous” means the dance style or the musical style to you, this album is the perfect backdrop to get in touch with the cultural roots of Docteur Nico’s world, and tear up the dancefloor like it was the 70s all over again!

The Docteur is in, and we’re loving this throwback to some of his best work. It has been lovingly restored and remastered, and in the digital age, this is the opportunity for figures such as Docteur Nico to find a second life among a whole new generation of listeners. With how addictive this sound has proven to be, we’re here for it 100% of the way!

For more info on Docteur Nico, check out his Spotify and Wikipedia pages!

Or check out an in depth story we just did on the good Docteur himself by clicking here!