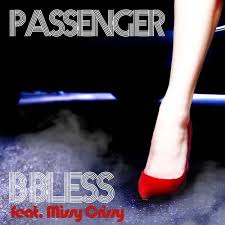 Be the Passenger of Missy Crissy and B Bless' new music video from Soularflair!

You want chill, New York hip hop aesthetic? You want smooth flow, unseen since the golden days of Biggie? You want sexy chill citypop for the modern era? All this and more is found in “Passenger”, one of the most popular singles that B-Bless and Missy Crissy ever produced!

Listen to it here!
soundcloud.com/bluepie/b-bless-ft-missy-crissy-passenger-extended-mix

As soon as ‘Passenger’ starts playing you’re lured in by a swinging saxophone that sets the suggestive mood for the rest of the track. The song begins with a slow classical jazz composition then leads into a fast-paced rap supplemented with a high melody from Missy Crissy, while a strong RnB/Electro-pop beat pulsates through the song reflecting both artists and their genres accordingly. The lyrics describe a love affair and easily resonate thanks to the catchy beat.

You become a passenger to the song as it drives you into an undeniable groove that leaves you wanting to dance the night away.

Passenger incorporates a rhythmic rap with an enticing pop/dance beat that differentiates from common RnB thanks to the exclusive tone of Missy Crissy that complements B-Bless perfectly.

So isn’t it lucky that the one and only Soularflair, the madlad behind some of the wildest singles we’ve ever seen, as well as some of the greatest music videos we’ve seen, has once again teamed up with Damien Reilly to give Passenger a fitting music video?

Southpaw’s music videos were some of the most recent that Soularflair had turned his attention to, and Sam Pollard’s World Of Difference wasn’t far behind. But Soularflair has done plenty of other music videos, such as for Danny Vash – now ain’t that a classic throwback? This new music video is just as sexy as the song itself, and more fitting visuals wouldn’t be possible! Soularflair’s talent for both music and visual editing come into play here, as anybody who has produced a music video can tell you – you need music talent for music videos, as well as editing knowledge! Luckily for us, Soularflair is a mad genius who loves to create things, and a jack of all trades, so he comes into play well here!

But what of the singers?

Inspired by many genres of music, B-Bless finds a way to be outside the box. One day he’s street rap, the next he’s spitting a rhyme over a dubstep beat. Versatile and brash, Bless’ consistency should be appreciated among the masses. And that’s why we write up stories like this – to introduce newcomers to his unique brand of awesome tracks! And our personal pick among these? Passenger of course! The extended mix gets us in the mood to cruise through the city… on a night without too much traffic, mind you! And why the extended version specifically? Gotta play it longer so you don’t have to hit the repeat button as often!

We have radio promotions chugging away on this track globally and it’s working – people all around the world have the chance to cruise to this. Sure, in these times of coronavirus, any cruising one might be doing is in one’s daydreams, or down to the grocery store, but Passenger is also one of those versatile songs that can be thrown on whenever you wanna bring a chill, catchy urban aesthetic to a room! It can also be used to get you up and going, as despite having the chill ambience, it has enough BPM and catchiness to bring some hype too! Guess it’s true what they say about B-Bless being versatile. It takes talent to do many different things and still keep your experience on display!

But what of Missy Crissy? Well, her featuring on this track is not to be understated in the least! The cool urban identity of this track is an aesthetic that’s clearly close to both Missy Crissy and B-Bless, and it’s but a slice of the action when it comes to her excellent music!

As Damien Reilly, CEO of Blue Pie Records says:
“Missy is a rare talent and a vocalist that hits the note right in the middle. She has an incredible work ethic and success is now knocking on her door. We believe in her abilities not only as a vocalist but as an artist that can put on one hell of a show. Raz B has been with DJ Central scouting talent, so the credit goes to Raz for finding Missy!”

Whoever of these three you came out here to see, you can be sure that the new Passenger music video and the impact it’s had on the music scene can’t be understated! It’s blowing up right now, so go join the craze and find out why it’s already so beloved, right out of the box!